It was my unanniversary celebration yesterday, as we got married on 22 March, it is normally much easier to celebrate on 21 March as it was a public holiday.

So, we/I decided to take a trip out to Hartbeesport. We do get out there quite often as it’s on the way to my in-laws game farm in Brits. Also, I love visiting the windmill for some Dutch treats (but info on that is for another post). But, we had never been to French Toast Koffie Kafee (until now), however, we had been told that it is worth a visit as the food & atmosphere are just awesome. So, we set off yesterday morning to go and see what it was all about.

The French Toast Koffie Kafee was specially built as the official ‘Bar’ in the film French Toast (an Afrikaans film). If you have seen the movie, which I haven’t, it is known as Café Alexandre. On the same premises, just outside of the restaurant, they have built certain elements that are unique to Paris for us to enjoy, such as a 12.5m Eiffel tower, the ‘I love you wall’ and even a small lock bridge, where you can purchase a lock and seal your love forever.

I know it sounds a bit strange to have a little bit of Paris in Harties, but I really enjoyed it. Unfortunately I didn’t get anywhere near the bridge & tower as there were just so many people but I did appreciate it from the distance of my table.

Having been to Paris, I did find the restaurant reminded me of alot of the places we went there. However, next time, I would definitely like to sit outside rather than inside.

This is the most important section, as let’s be honest, we all love good food & coffee! I went for breakfast, just so we know what we are discussing! They have quite a small and limited menu, which wasn’t an issue for me as I found something quite quickly that sounded delicious.

While there are some egg options, mostly including french toast – obviously! I decided to go for a sweet option, I mean… I was in pretend Paris, and they love sweet breakfasts. I had the french toast with cream cheese mousse and berry compote, which I can totally recommend. It was so delicious, the only thing I did find was the portion was too much, you get 3 pieces of french toast and I could only eat 2… other than that, I would definitely have it again!

My husband had the cinnamon infused apple french toast pie – and all i can say is wow – food envy! It was sooo good, it was like a french toast croissant basket filled with cinnamon stewed apple…OMG AMAZING! At least I got to taste it, but I will definitely be having one next time (sadly I didn’t get a pic, my husband was too quick to eat it).

Coffee is quite important in my life, I love it and drink quite a lot of it. It’s not like, I have 4 coffee machines, 4 bodum French Presses and a few other espresso makers (which are mostly my husband’s). So, more about the coffee at French Toast – I was a little worried when I first got my cappuccino, as looked like it might be too strong for me. However, I was pleasantly surprised, the coffee had a nice flavour and balance of milk & foam, for my palate. I would have another one – which I guess is the main thing! And, I also really enjoyed it! 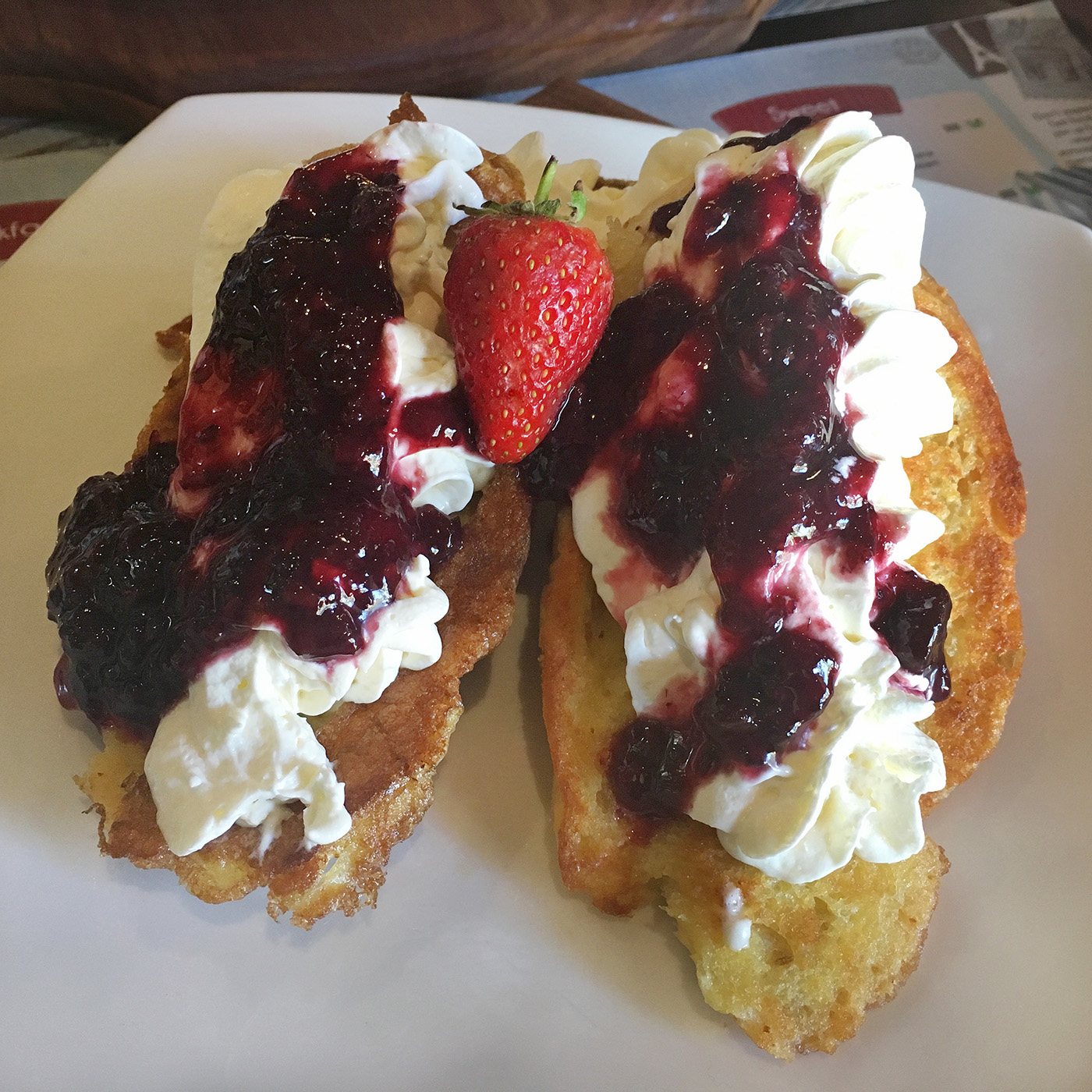