My husband have been exceptionally lucky the last few years and have managed to do a few overseas trips. Last year, was probably the one that I least expected to fall in love with. We went to Cyprus last Summer. And, I must say I feel that it is underrated as a Summer holiday destination. It has hot weather, beautiful beaches, and delicious food! What more do you want when at home in SA there is freezing cold winter.

My first impressions of Paphos was that it is a cross between Nelspruit & Durban. And, that there is something so familiar about Cyprus, that it almost feels like home – which is weird I know, as it’s an island in the Mediterranean.

Best time to go to Paphos?

We went in mid-July, which in hindsight was a bit of a mistake, as it was so hot & humid. We pretty much melted as we left our air-conditioned rooms. Having spoken to the locals, they said June & August is better, as the weather is still perfect for swimming but is a little milder than July.

So I guess, if you are a Durbanite, you probably would feel right at home in Cyprus in July…however, I did not. I found it way too hot to do much. I mean most days we were at the beach around 8am till 9h30am and then left as it was getting way too hot, the sand was burning our feet on the beach. And same in the evening, we would normally arrive around 6 or 7pm for about an hour. Having said that, there were people lying on the beach, but they looked pretty toasty and lobster like. My pale complexion doesn’t do hours of sun exposure well.

SO to recap…maybe go in June or August.

When you start looking at accommodation in Cyprus, there are so many options, but we were 7 adults and 3 children so we wanted a big house or villa to rent for the 2 weeks we were there. I must say, the prices are not as bad as I expected, obviously the closer you are to the beach and the fancier the house, the more it will be. We rented  a nice comfortable villa, in Coral Bay, which is just outside of Paphos town, which had a pool and was about 1.5km from the beach. However, in that heat, there was no way we could even walk. The name of villa was Villa Nichola – yes they all seem to have names.

There are lots of places to go and things to do, depending on your interest. I am just going to give you my highlight list of the places we went that I really enjoyed. I think that will be easiest as we were there for 2 weeks, which is quite a long time for Garith (my husband) and I to be in one place.

Also, you need to keep in mind that Cyprus has mainly archeological attractions to see, and some monasteries but they are not like the ones that you see in the rest of Europe – they are still pretty but different.

Coral Bay Beach is one of 12 Blue Flag beaches in Paphos. So it’s safe, clean and can be crowded. Having said that, it’s only really the beach area, the ocean it’s self doesn’t feel crowded. But, there is a large area to swim, which helps. Unlike most of our beaches. Also, the best thing about most of the Cypriot beaches is that sand – it’s so soft…it does sound like a strange thing but a lot of Europe has pebble beaches – which I’m not too keen on….but probably because we grew up with sandy beaches.

The ocean is so calm and pleasant to swim in. You kind of just bob around. I really enjoyed it as I find SA seas can be a bit rough. 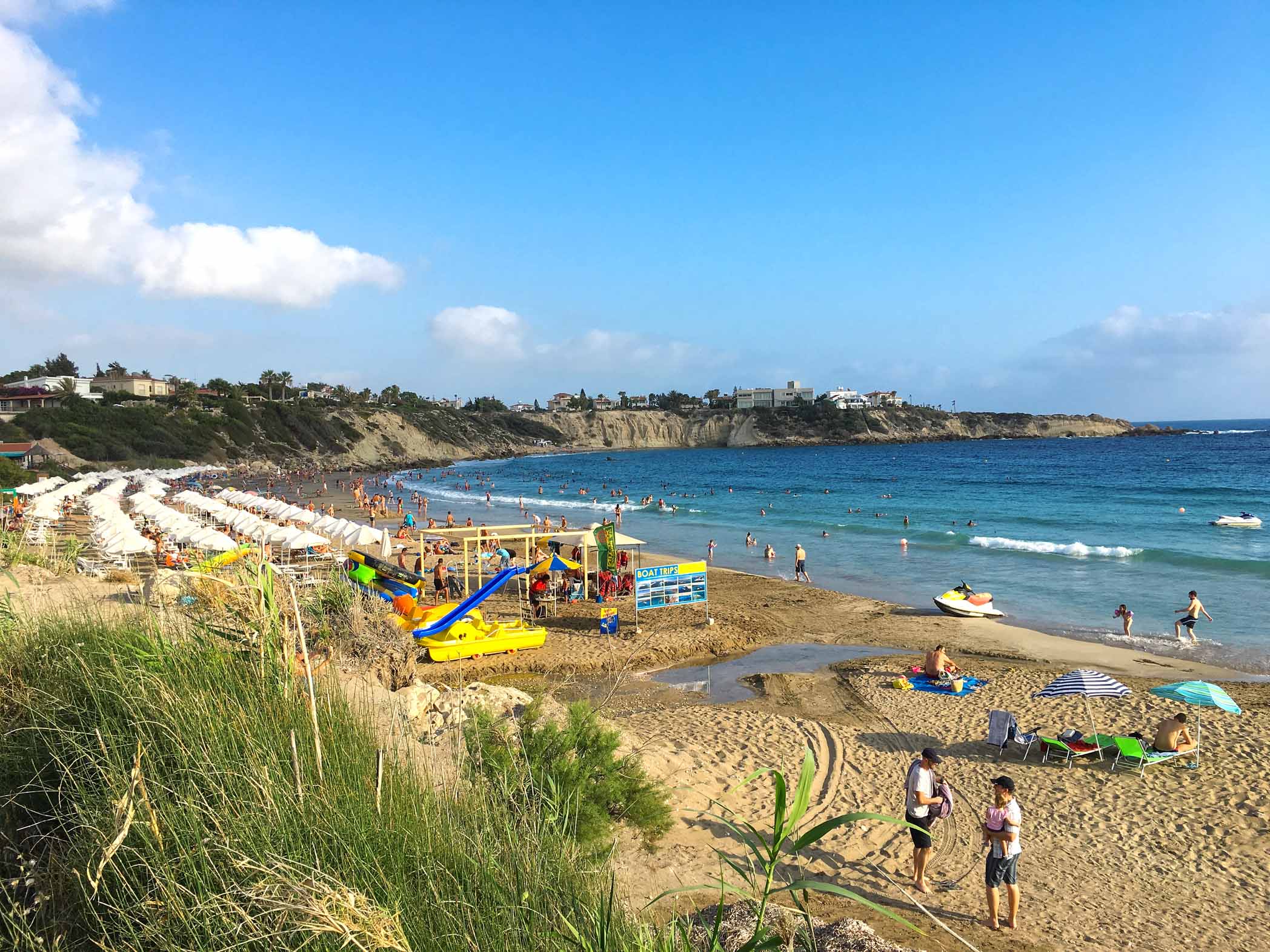 Both of these sights, can be found in the city of Paphos, and I did see a bus stops pretty close to both. So, I’m guessing if you don’t have a car, then you could take a bus.

If you are a history buff, then you will really enjoy Tomb of the Kings. It is remarkable underground tombs dating back to the 4th Century BC. Tomb of the Kings is quite a big area, so wear comfortable walking shoes, that can handle uneven ground. Also keep in mind there is almost no shade there, so you need hats & sunscreen and I would recommend getting there as early as possible, so it’s a bit cooler.

Just next to the harbour, you’ll find Kato Paphos Archaeological Park., which is an UNESCO World Heritage Site that dates back to prehistoric times and contains some impressive Roman architecture and beautifully preserved mosaics. The mosaics are in buildings to preserve them but those buildings are like green houses, so most of the time it is hotter inside than outside. So again, it’s probably a good idea to get there early when it’s cooler. Also there are some of the mosaics that you are not allowed to take photos of, so keep this in mind. 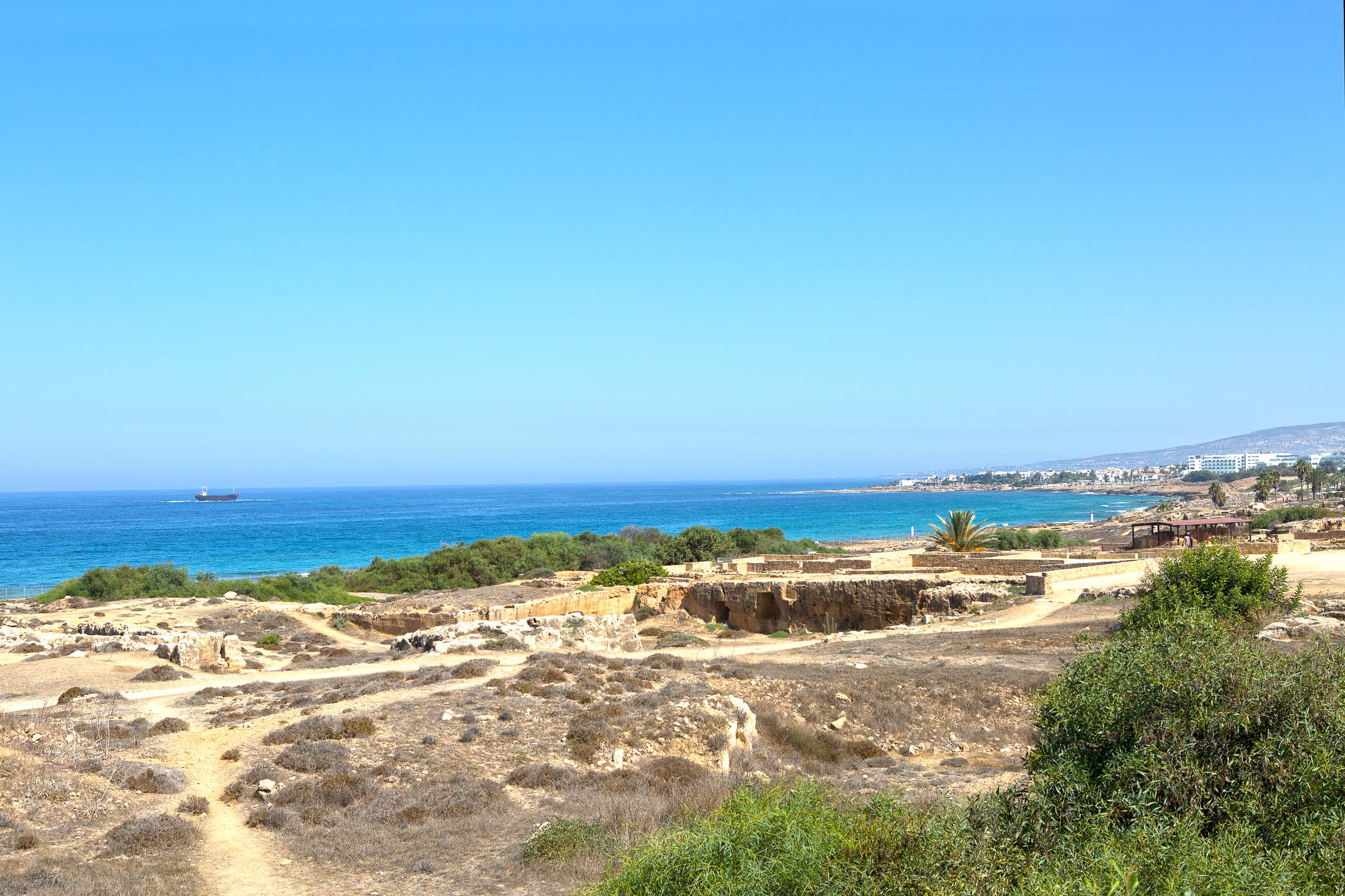 Tombs of the Kings in Paphos, Cyprus

Some of the mosaics at Kato Paphos Archaeological Park in Paphos, Cyprus

The Castle is very easy to find at it is at the end of the marina in the city of Paphos. It is not very big, so you will not be there for hours and hours but the view from the top is really beautiful. And, for me, that is more than enough! When we were there, they were in the process of setting up for a concert, so you can see all the arena seating waiting to be put up.

It always amazes me, that no matter where you go in Europe you are bound to find a lock attached to metal railing or fencing somewhere. I found the one in Cyprus in the castle…of all places! 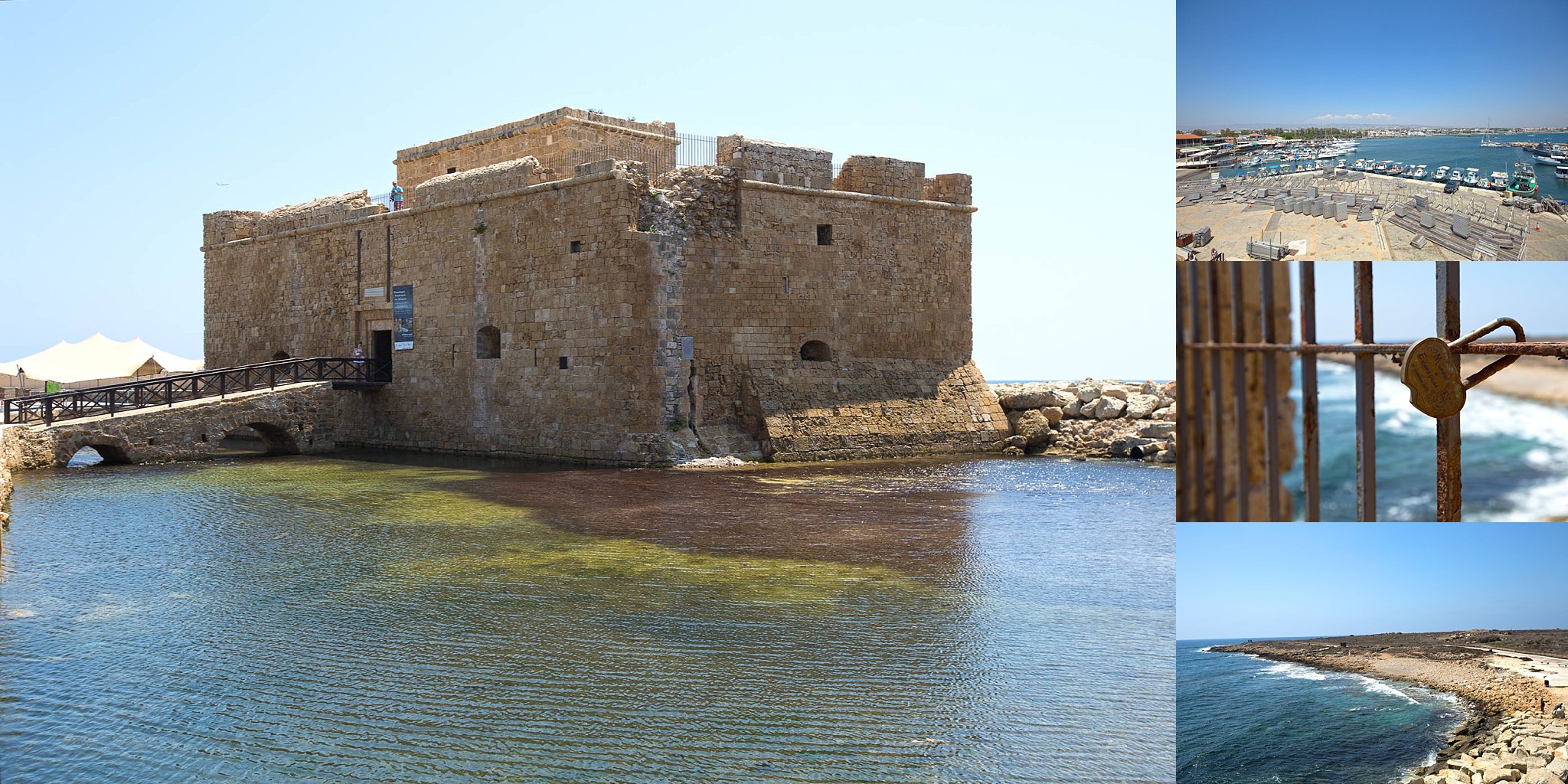 This Monastery is apparently one of the best known ones in Cyprus. It’s not that far out of Paphos, but you do need a car.

It is pretty and looks similar to the other buildings in Paphos. There are some beautiful mosaics and there is a little museum near the main monastery that has come interesting archeological things in. You can’t take photos, so sadly I can’t share any!

And, the best part is there is a little coffee shop opposite the car park where you can chill for a few mins before going home. It is quite pretty there as there are lots of big beautiful trees around the car park.

I had to include some photos of myself, Garith and our friend Marco with his little girl Kenzie – just to prove we were there 🙂 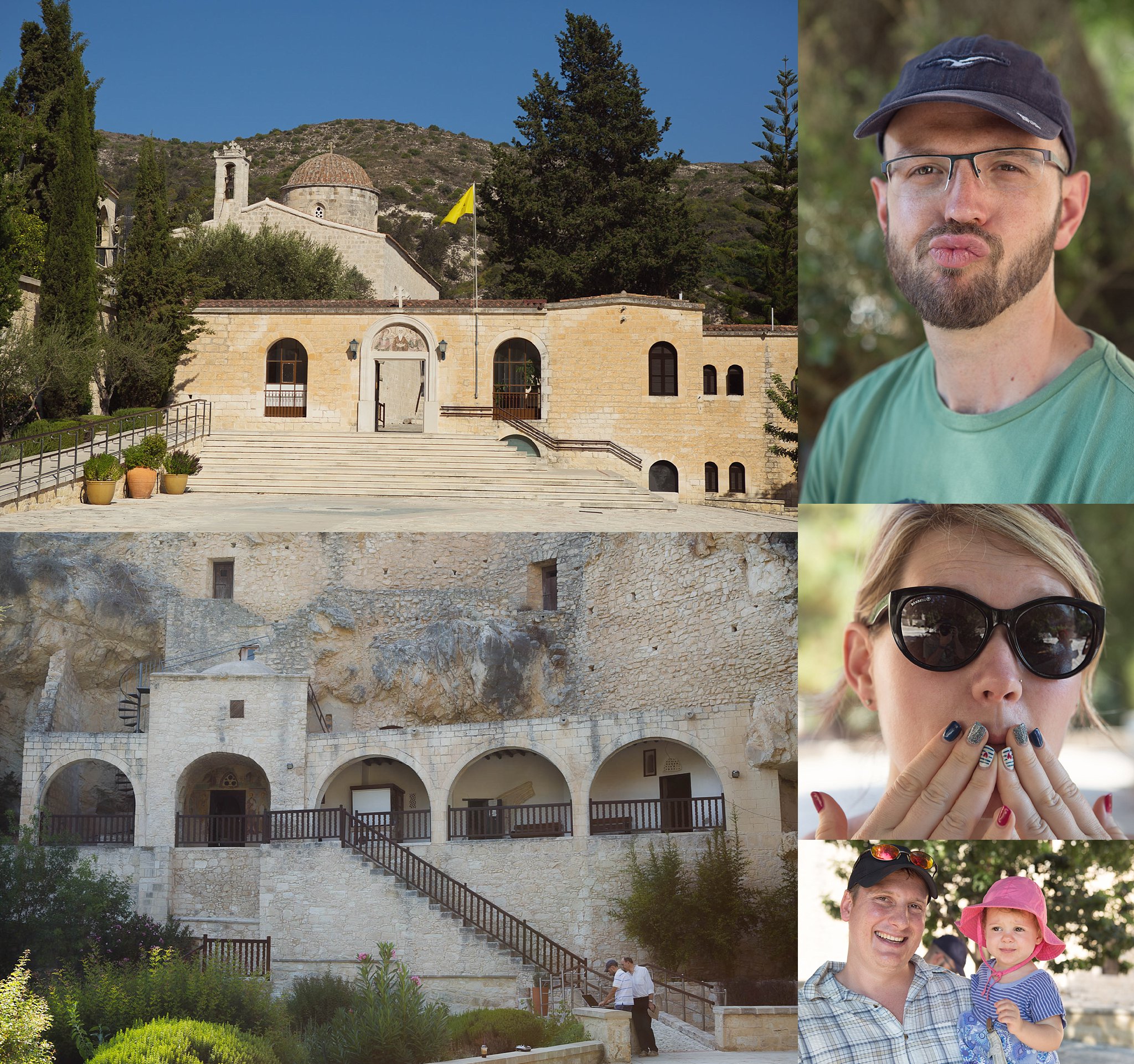 Lara Bay is beautiful as it’s completely unspoiled and be honest doesn’t have loads and loads of tourists. However, there is a reason for that, it’s not easy to find and the road to get there is not great as you have to go through the Akamas Paninsula National Park. On the plus side though, is the fact that, it is a protected area of outstanding natural beauty. The sea is so turquoise and clear and it really is a beautiful place to visit.

When you arrive at Lara Bay, keep in mind that where you park is much higher than the beach, so you have to walk down a steep area of beach sand. They have a wooden path but we found that we kept sliding on it because of all the sand. Also, depending what time of day you go, that sand is fiery hot…I mean like hot coals – so take your flip flops!

The beach itself is where Loggerhead turtles go to lay their eggs. We didn’t see any turtles, but we did see where people had some and marked off where the nests were. It is quite special…as you knew there were baby turtles under there waiting to hatch. Or maybe that’s just me!

View on the way to & from Lara Bay in Cyprus

You can only really go here if you have a car, but is so worth it. Even if you are not a monastery fan, the drive alone makes it worth it. Kykkos is up in the mountains, so from Paphos, you have to go through some of the most beautiful quaint little villages and towns. You know you are out of the tourist places, when even the bank titles are in Greek. And, the mountain passes and scenery is gorgeous, however, I must point out that if you get car sick, like I do. You do have to stop a few times to get out as those roads are really windy.

The actual Monastery is one of the richest in Cyprus, so there are beautiful mosaics, and inside the monastery there is a lot of gold. The one thing you need to keep in mind though, is it is a functioning monastery, so you need to dress appropriately. Obviously no exposed shoulders or legs. They do prefer ladies to be in skirts or dresses, and men in long trousers. But, if you don’t have anything that will work – they do have gowns that you can use there to cover up. Obviously, there are tourists there that just don’t care, but I do prefer to be respectful of other people’s religions and customs.

Let me start this section by saying – I’m an idiot and dint take any photos of any of the food we ate. However, if you are a greek food fan, like me – then Cyprus is like heaven! Almost every restaurant that you go to has a section of local wines and food options. I recommend that you slowly make your way through their wine options, as there was some really good ones on offer – I would never get the spelling right – my Greek is nonexistent! However, I liked the medium dry varieties – which is kind of like our semi-sweet. Although their dry ones were also nice.

You know I am a foodie, and all I will say is, if you want authentic Greek cuisine then you have to go out of the main city areas and venture into the country side a bit. However, the only down side is that then the people don’t speak much English but the food is incredible.

I highly recommend going to Vouni Panayia Winery, you can do wine tasting and have lunch. But, if you want lunch which I cannot recommend enough, you need to order it the day before. The lunch is authentic Greek, and is all hand made and what you receive depends no what they have in their veggie garden, etc. So it was amazing and their wine is also really good. We bought a few bottle to bring back.And do yourself a favour, buy their walnut preserve and cherry preserve. To say it’s incredible doesn’t do it justice! We got a bottle of each to bring back to share with our family. 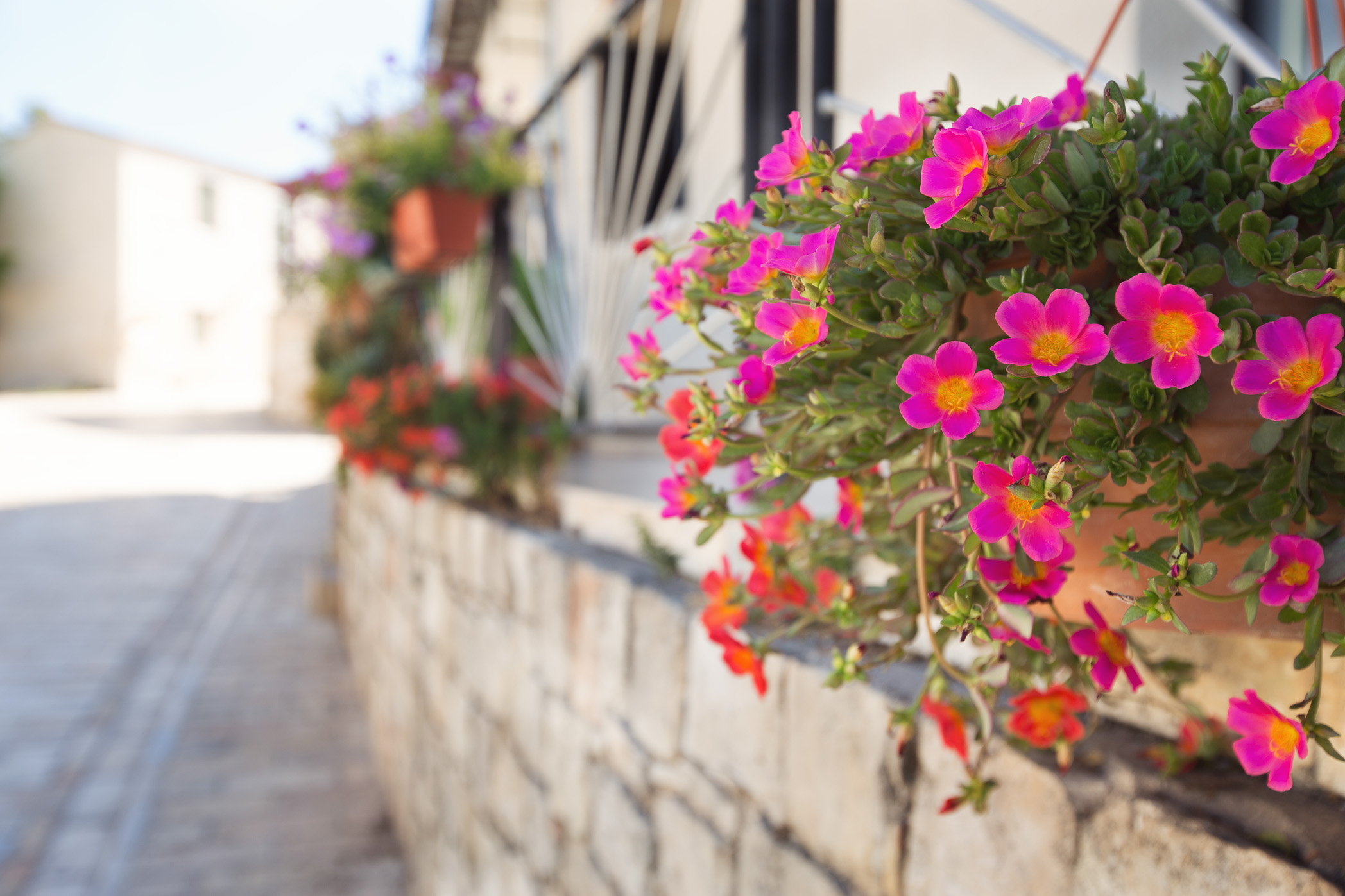 Kathikas, a small little town you go through on the way to Vouni Panayia Winery

I know for a lot of us, this is very important, especially with the way the Rand is at the moment. So Cyprus use Euro’s but I did find that it is cheaper than alot of other European countries & cities. But, sadly I wouldn’t say it is cheap, because as we know no where is cheap in Europe. So now that we are on the same page.

Overal, I dient feel ripped off, I found that it was reasonable for Europe. 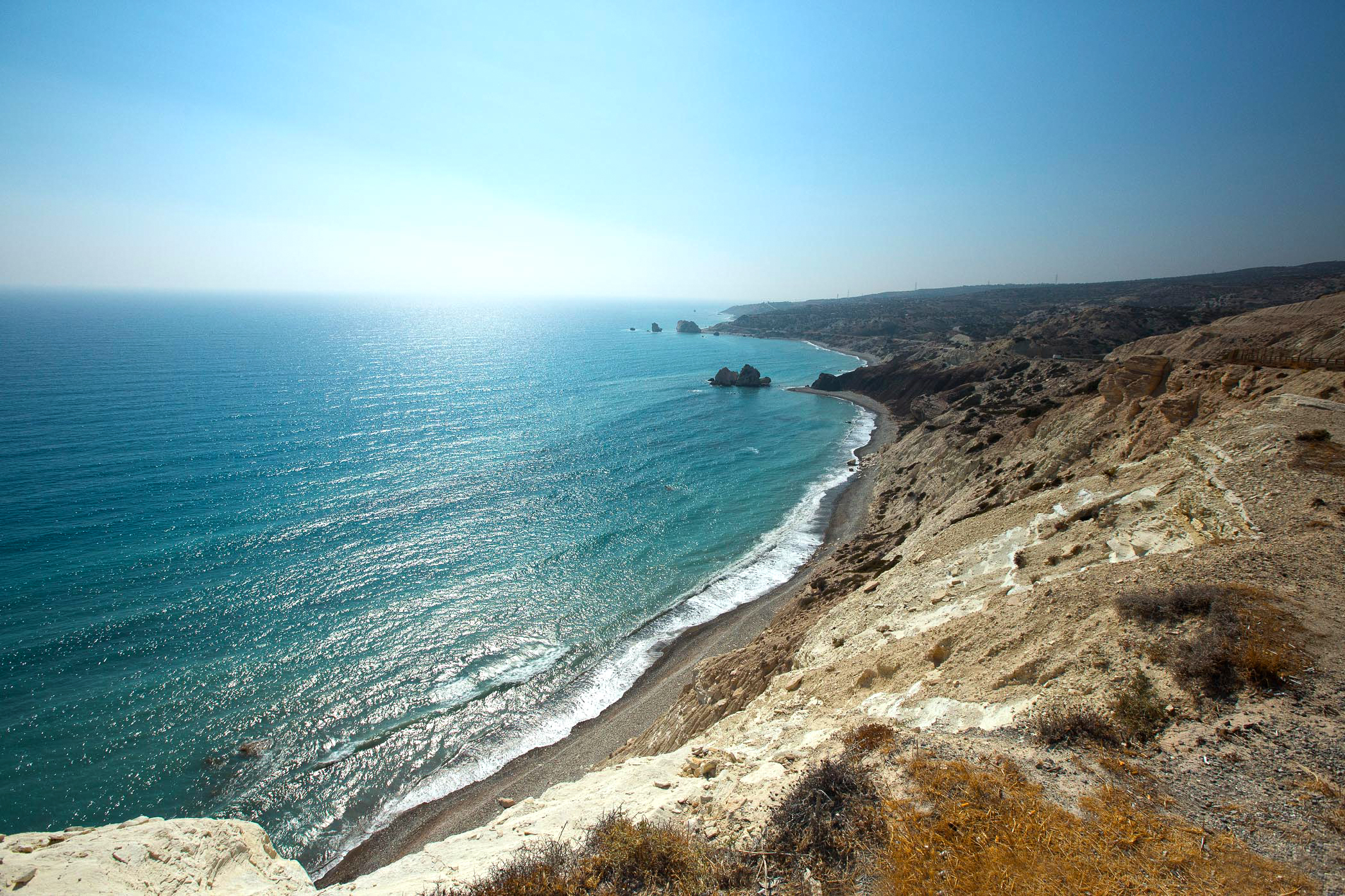